The two storms didn’t affect me and my city that much because they turned away from Moca. We did have a bunch of rain and it was very windy but nothing wild enough to destroy things. I experienced for the first time free from school because of a storm! The schools closed and most workplaces did too. That had never happened to me in Denmark. The storm Irma was the biggest and I didn’t go to school for four days. The second storm was Maria that resulted in three days off school. During those days, it was very windy and raining a lot. People spent time in their houses and the streets were deserted. The only ways Irma affected me negatively was that the Marron 5 concert I was supposed to go to got cancelled. Nooooo. The walls in my room leaked water because it rained so much. After a few days, the water disappeared and it looked normal again.

Other exchange students that lived places were storms was very strong got evacuated. They lived other places until the storms was over and then they got reunited with their families.

Irma
Even though I was safe many places in the Dominican Republic is destroyed because of Irma and at least five have been killed. 5000 people was evacuated from the popular tourist places spots Cabarete and Sosua. The hurricane Irma stormed through the Dominican Republic Thursday evening the 7th of September and destroyed many buildings and nature. There were hurricane warnings everywhere and everyone was told to stay indoors. We could keep updated on television where they constantly showed updates on the hurricane. All the schools across the country was closed and most if not all workplaces were too. Families stayed together and the poor people stayed at the richer people in the family because the houses could crash.

Maria
The government evacuated more than 4000 people to the Capital Santo Domingo. Maria wasn´t as wild and destroying as Irma but it still made damages around the country. Maria damaged Puerto Rico way more than this country because it passed of its east coast. Maria was a category 4 storm when it was at the Dominican Republic but at its highest it was category 5.

Picture I took out of my bedroom window during the storm Irma. 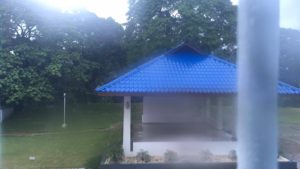